I've given up meat for lent this year, just as I did 2 years ago. I love cooking veggie food anyway, and it's such a fun way to make yourself try out different meals. I find that when I'm veggie, rather than choosing a meat and planning my meal around that I think a bit more outside the box. Whether I start by choosing a cuisine, a carb, a protein or a veggie, I find it makes things much more varied and I end up with lots of yummy meals! It's also healthier, cheaper and better for the environment. What's not to love?!

When I saw that Becs over at Bits and Bobs Becs and Fay at http://www.foodfables.co.uk/ were doing 'Meat Free March', and had a recipe swap to go along with it, I knew I had to get involved! The idea was that everyone got partnered up and sent a meat free recipe along with a couple of ingredients. I was partnered with vegan Sharon, who is supposed to be starting up a blog at www.virtuallyvegan.co.uk but hasn't quite got it going yet!

When my parcel from Sharon arrived yesterday, along with a recipe for coconut and lime vegan cheesecake, I could have hugged her, for several reasons!
a) I was supposed to be having a friend over for a dairy free dinner that evening and had no inspiration for a pud at all.
b) Her dessert included both silken tofu and avocado, both of which I have been meaning to try out in a dessert for ages and have never been brave enough to try.
c) It involved a buttery biscuit base, and any excuse to watch this video is OK with me!

I sprinted off to the shop, and bought all the other bits and bobs I needed. (Ingredients list and recipe are at the bottom of the post), and proceeded to get started. 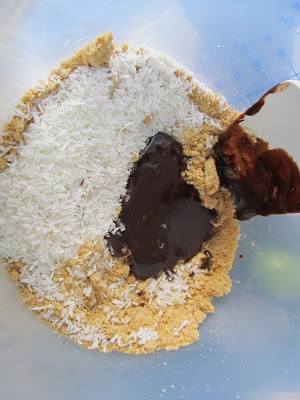 First step (melt chocolate and marg and mix into biscuit crumbs and coconut) was successfully accomplished, and as per instructions, I pushed it down in a dish. Unfortunately, this is where I had a slight wobble! Sharon said on her instructions that she's quite an instinctive cook, and the amounts were very vague. Given this, I have no idea why, when I knew the mixture was too dry and wouldn't set together properly, I didn't mix in more butter and chocolate. A combination of laziness and stupidity, clearly. After the 1 hour setting time, my mixture still looked like this when you prodded it:

I then had a rethink. It wasn't going to set, and I didn't have time to melt more chocolate and try again. After a lot of flapping round the kitchen, I decided that individual glasses what what I needed. Unfortunately, I have just moved house, have very minimal kitchen equipment at the moment and so had nothing of the kind in the house, apart from one slightly dodgy wine glass. A lot more flapping later, I found a stack of hummus tubs we'd finished with stacked in the recycling. After a wash, they made very respectable dishes. Hurrah for re-purposing!

Problem resolved, I mixed together the topping ingredients. 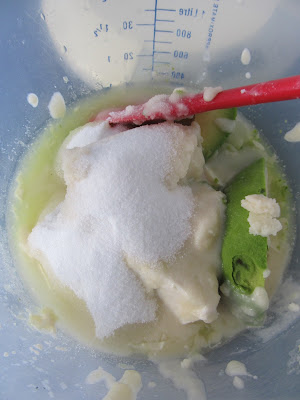 And spread it on to the biscuit base, with a bit of dessicated coconut and lime to decorate, and ta-dah! finished!

I'm really pleased with how these turned out, both in appearance and taste. Individually, I was worried the base was too coconutty and the topping was too limey, but together they formed a delicious and harmonious whole. There was more based compared to topping than I'd expect for a cheesecake (mine was about 50/50), but when eating I actually thought that was OK. The texture of the tofu mixture was really surprisingly cheesecake like, and has to be healthier than munching normal cheesecake! And best of all, it was so easy! My boyfriend wasn't a fan of the lime (he's weird with citrus desserts), but has begged me to make a berry version soon, and my friend and I both wolfed ours down. Definitely don't be put off by the unusual ingredients, this makes for a scrummy pud!

1. Melt chocolate and marg together. Mix in coconut and biscuit crumbs. Press into bottom of a greased dish (1 big 9 inch flan tin or several individual dishes). Leave to set for an hour.
2. Heat creamed coconut with lime zest and juice. Put into bowl with rest of topping ingredients and blend until smooth.
3. Add to the top of the base(s) and decorate with dessicated coconut and sliced lime rind (or something else, Sharon suggested kiwi but I'm not a big fan)
4. Leave to set for about 3 hours, then grab a spoon and dig in!

Thank you very much to Becs and Fay for the organising, and Sharon for sending me such an interesting, delicious recipe!